Home > Blog > You Restarted the Server From Where

You Restarted the Server From Where

Mobile Remote Monitoring and Management (RMM) gives you full network control, no matter how strange a place you happen to be in.

MSPs and IT admins spend way too much time on call. No wonder so many complain about not having a life, what with working overtime chained to a console at a data or operations center, or just the cluttered desk the admin sadly calls home.

What’s worse, if the admin is visiting an end user, waiting for the dentist, or even taking a restroom break, problems can’t be dealt with, and common tasks such as system updates won’t happen. Now you have an overworked unhappy admin and irritated end users or MSP clients. Not a great combination. Meanwhile safety is at stake since emergencies such as breaches can’t be quickly dealt with.

What if admins could do their critical work anywhere? The benefits are many. First, you have an admin that has fallen back in love with IT; remembering how he or she was drawn to it in the first place. Many admins work more than 9 to 5, so if they now have the freedom to work from different places, morale soars. 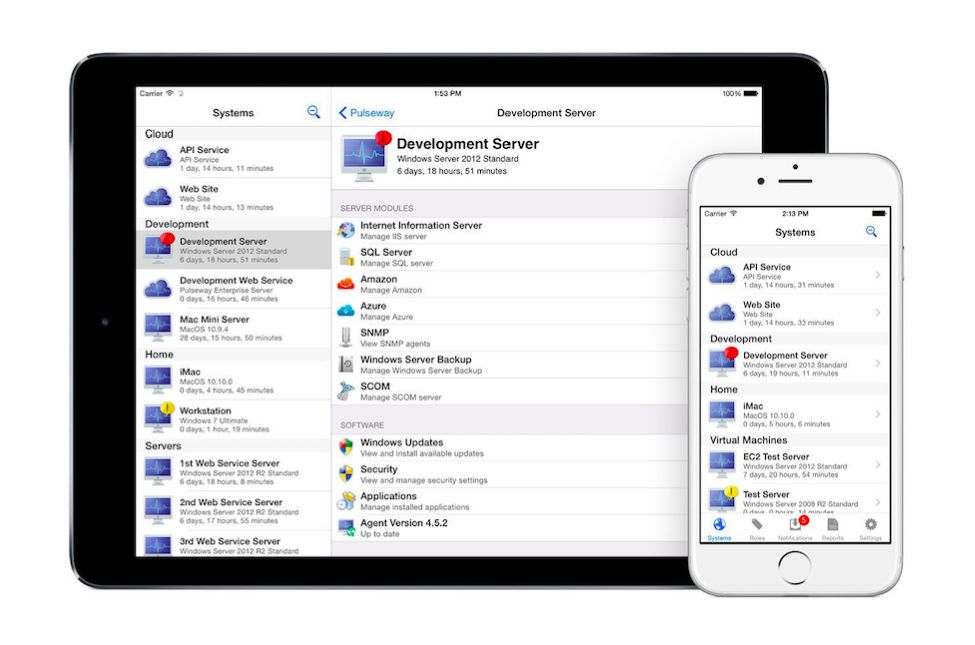 Unlike other tools with some mobile ability, the Pulseway RMM was built from scratch to run on mobile devices, such as tablets, smartphones – even watches. And it works with Web browsers, whether on a mobile device or your workstation..

That all means serious system administration functions across the entire network can be done when they need to get done, not just when an admin makes it to the console. Meanwhile the interface is built entirely with mobile in mind so it’s a pleasure not a bear to use.

Pulseway users, which include Managed Service Providers (MSP) and IT admins, love the freedom the Mobile RMM provides, and constantly post tweets and photos showing some of the coolest places they get to do their work. First is a user from Fremont1 Tech Office stuck at a Taco John’s restaurant during a blizzard, and able to work and eat spicy food at the same time! All with just a simple tablet.

First is a user from Fremont1 Tech Office stuck at a Taco John’s restaurant during a blizzard, and able to work and eat spicy food at the same time! All with just a simple tablet.

During our blizzard, we can monitor servers & network via @Pulseway @Intermapper from Taco John's. Love these tools! pic.twitter.com/C0IKwWz2bG

Next is Victor Hernandez from Santa Domingo keeping things running with his classy Moto 360 smartwatch.

And lastly we have a customer with an Apple Watch checking the status of the network.

A user getting a critical Server notification on the Apple Watch #ServerMonitoring #ServerManagement pic.twitter.com/F93Enh5TIi

There are many virtues a full-featured Mobile RMM offers, especially one built from the ground up for these smaller devices. These include:

The Pulseway Mobile RMM doesn’t just get accolades from Twitter. The University of Auckland Business School was one of many customers that have agreed to be part of a case study.

Here’s an excerpt. “Eugene Chan, Deputy Director Digital Services at the University of Auckland Business School, is a man with responsibilities. He and his team look after more than 150 physical and virtual servers and hundreds of virtual desktops that support at least 12,000 students and 600 faculty and staff. If anything goes wrong, he and the team have to fix it…fast. Regardless of the time or their location. Until recently, that meant lugging a laptop around and looking for Wi-Fi access if they received any alerts from users about system slowdowns. Now they can monitor server performance and ensure proactive management, wherever they might be, thanks to Pulseway Enterprise Server, an app that runs on their smart phones,” the case study revealed.

Meanwhile, customer Reflex Distribution talked about the value of admin mobility. “Whether it’s receiving notifications of critical updates or being able to reset a user's password from the comfort of my living room couch, Pulseway gives me everything I need and more from my pocket,” said Ciaran McHale, Field Applications Engineer for Reflex Distribution.

The Pulseway RMM is a comprehensive multi-platform tool that supports Windows, Mac and Linux – plus applications that use the monitoring API.

With Pulseway, you can get network performance, system resources real time status, logged in users, and get Windows updates. You can restart systems and services, control running processes, and apply patches and critical updates. Patch management also includes support for Windows Server Update Services (WSS) so you can patch servers from your mobile device.

Out of the box, the tool supports Exchange, SQL Server, IIS, and Active Directory. It also supports Hyper-V, VMware, SNMP enabled devices, and much more. 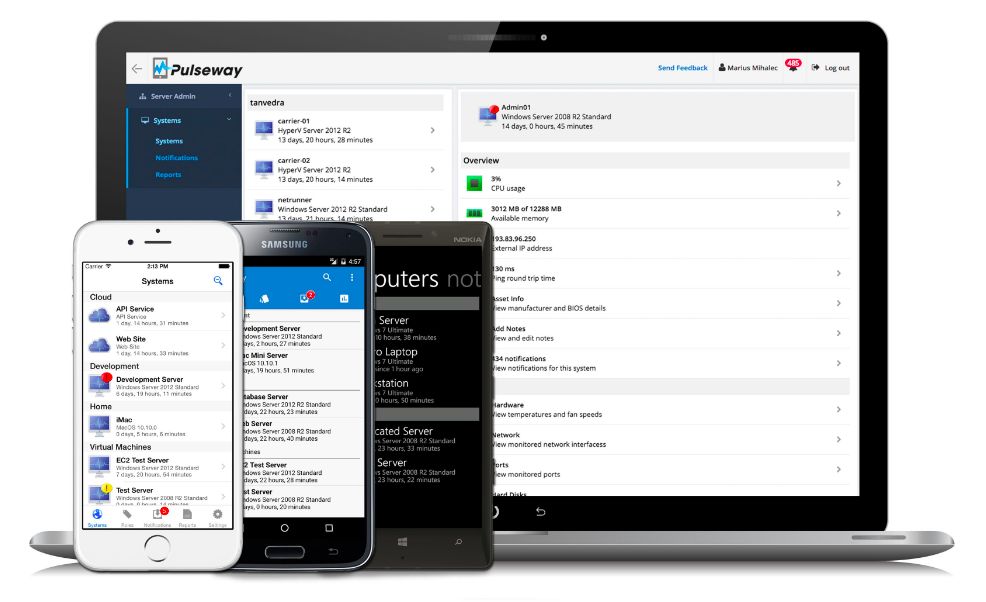 With Pulseway, admins will be the first to know of problems because their watch, phone or tablet will tell them. This way alerts that indicate a possible system failure can be dealt with immediately. Users can also access the Remote Desktop to control and fix machines from afar.

For the sake of security, Pulseway communications are encrypted and run across HTTPS. For more protection, you can adopt two-step authentication to control who accesses devices.

For auditing, such as in the case of compliance, you can run forensics and keep complete audit trails.

Meanwhile you can manage passwords such as resetting passwords for groups of users, or disable accounts.

Finally, with the REST API or the Cloud APIs, admins can easily control and monitor applications, and add them to your group of monitored systems.